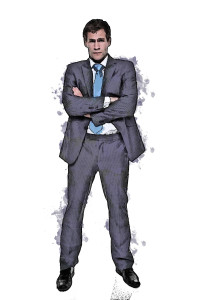 On the day of the hearing David and I were seated in awkward silence in a courtroom awaiting the judge’s arrival. The judge entered, introduced herself, settled down behind an elevated bench and stared down at us over the top of reading glasses perched on the tip of her nose. She explained how she would listen to our respective positions and then give us each a frank opinion as to the strengths and weaknesses of our cases.

David told her that I had refused to pay for a piece of equipment that was in perfect working order when it was shipped from his factory. He said I had claimed the equipment was malfunctioning but that he had fulfilled his obligation under the terms of his warranty by sending replacement parts. The judge questioned him about the terms of his warranty and then asked if he had documentation to offer as evidence. He handed her a manila folder that appeared to contain nothing more than copies of invoices—just two or three pages.

She briefly looked at his documents and then turned her attention to me, asking for any documentation I could offer in evidence.

I handed over a three-ring binder about an inch and a half thick containing a copy of every document relevant to the transaction: all rough notes, transcripts of telephone conversations, letters, fax documents, emails, bills from the electrician, shipping bills, photographs of burnt-out dryer parts, and, most importantly, all the documents to and from my lawyers. Every document was filed by date and was numbered and recorded and indexed at the front of the binder. I was not the most attentive accounting student the University of Cape Town had ever seen, but one piece of advice from an auditing professor has always stuck with me: “Prepare your files in a manner a judge will understand.”

As I explained how my customer and I had been inconvenienced by the malfunctioning dryer and how it had caused expenses and loss of revenue, she leafed through my binder. Eventually she again turned her attention to David. What is it about a judge’s gown and glasses perched on the tip of a nose that is so intimidating?

“Mr. Brookes,” she said, “I don’t believe your warranty has any relevance in this matter.” She went on to explain that it was a case of not fulfilling a contractual obligation to deliver a properly functioning piece of equipment. She said that she believed that if he chose to go ahead with the suit he would be doing so with a very weak case. She suggested that he settle right away and avoid the almost certain possibility of incurring heavy costs. “As I leaf through Mr. Best’s binder I repeatedly see the name of one of the most expensive law firms in the country. I don’t think you’ll want to pay their trial bills.”

David decided to take the judge’s advice and agreed to a settlement that included undertakings to withdraw his claim, arrange to ship the dryer back to his factory at his expense, refund me for the electrician’s bills, and refund the travel and accommodation expenses I had incurred for flying halfway across the country to attend the hearing.

The fourfold lesson for any small business owner caught up in a similar situation is simply this: don’t launch spurious lawsuits, fight back vigorously if you’re the victim of a spurious lawsuit, prepare properly, and work with a good lawyer in a good firm.