Usually the broker’s service doesn’t cost you a penny—he or she is remunerated by the insurance company with whom your business is placed. But therein lies a potential conflict of interest and further reason to select carefully. You want to trust that your broker will not put his or her commission before your risks when recommending an insurer. In any case, even after a very careful selection process, you should still assume full responsibility for your insurance portfolio. Make sure that you understand every aspect of it and ask questions when you don’t.

Review your policies annually as a matter of routine. In my experience, some brokers left to their own devices can be less than diligent about monitoring your file, particularly if you’re a small pony in his or her client stable of big, valuable thoroughbreds. I’ve known some to simply renew an existing policy without even a cursory review, year after year. Typically, a policy is written, the monthly debit order is set up for the premium, and then tends to become one of those out-of-sight-out-of-mind matters that, all good intentions notwithstanding, you never get around to visiting. The problem is that a small business’s circumstances can change over time and insurance coverage can be found wanting when disaster strikes. 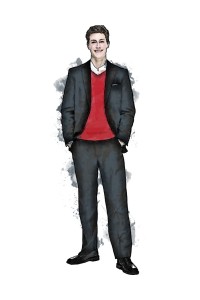 It’s been about a half hour since takeoff. Drinks have been served. The flimsy little fold-down tray can’t accommodate both a plastic glass of chardonnay and a paperback, so she closes the book and puts it on the vacant seat between them. She stares out the window. There’s nothing to see, but she’s not looking, she’s fretting. God, I hope that missing crate turns up. If it’s not one thing it’s another. What’s the point of sending two people ahead if they can’t set up? Last year it was—

She turns to look at him. She’s not surprised at the overture. He’s been looking like he wanted to strike up a conversation ever since they boarded. Why can’t people on planes just mind their own damn business?

“No,” she says. “I’m actually going to Long Beach for a trade show.”

“The screen printing show?” she asks, knowing Long Beach is the venue for all sorts of trade shows.

“Yes,” he says. “I have to buy a new press and some other smaller stuff. I’ve never been before but I figured it would save me a lot of time and hassle if I could see and compare a few machines all in the same place at the same time. What about you? Also looking to buy something?”

“No, we’re exhibiting. My company manufactures adhesives and cleaning chemicals. I’ve done the show for about six years now. Works out great for us.”

“Well, every year we find new prospects and usually end up turning most of them into customers.”

“You do any other marketing?” he asks, intrigued by her apparent enthusiasm for the show.

“Oh yes, we still do the usual stuff like flyers, email blasts, and phone calls. We’ve tried cold-calling prospects too, but we’re a small company and that takes a lot of time and the returns aren’t great. So shows make more sense for us.”

“Maybe I should be thinking of exhibiting . . . is this is a good one?”

“Usually. And it should be another good one this year if the freakin’ truck driver gets my crate there . . . But yes, it’s really well managed.”